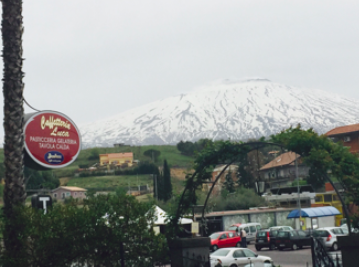 From Capo d’Orlando to Capo Passero by bike (PART 3) 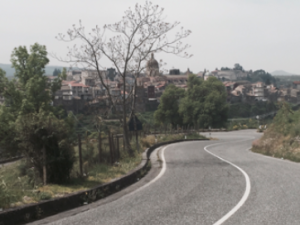 along the road which is currently the railroad and the Valley. The cold waters of this river that separates the physical chain of Nebrodi from volcanic massif. Some eruptions still defy in the barrier and the beautiful results can be appreciated if you visit some areas of the Valley, Mojo Alcantara and near Castiglione di Sicilia, not so far from Taormina, you can watch from the top of the hill the Ionian Sea.!

After Randazzo i go trought the Etna Nord. The road to Bronte home of the pistachios, dates back to the 1700 at 1100mt and here the south wind, as expected, makes double my effort. Bronte is 950 meters of hight and then descends gradually to the plain of Catania. I take this opportunity to stop at the entrance to the city and go to theCafeteria Luca where i  repay my fatigue with arancini and a good pistachio ice cream with chocolate, covered with pistachio powder! 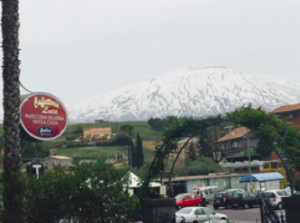 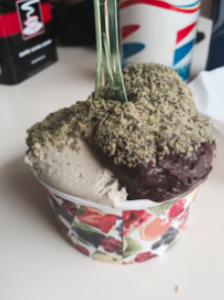 mentally than phisically!
The road around the Etna between Bronte and Adrano it is in a shameful state of abandonment and the beautiful scenery, the show of almonds, climbing lava, yellow gorse, eruptions blacks cutting the snowfields of the mountain, colors that change with the seasons, must defend itself against the attack of the rubbish dumped along the road for kilometer without any authority dealing with.!

This wind of the South and the milky sky already does not put me in a good mood and i want to go faster to get ahead.

Finally go down to the fertile plain of Catania, where hundreds of thousands of aromas of orange explode this time of year. 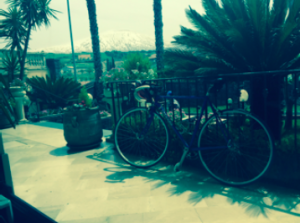 The route proposed by the Michelin guide through the plain is interrupted and partially used only by farmers and shepherds and, unfortunatelly, 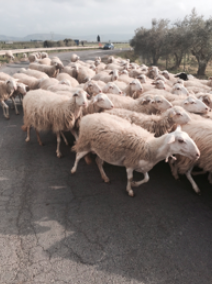 this is exactly where i suffered the first hole followed by a second one. I decided to change shoes and walk, pushing the bike up to the top of the road up to Militello in Val di Catania, 450 mt, where i planned to stop for the night. 145 km are already behind me. I can contact Francesca, the owner of B&B Casa Francesca with an extraordinary kindness and come get more 20km to Militello. The bike has been loaded into the car and soon i arrive at the destination.
Francesca offers me a large room on the second floor of his house in the center of Militello, with a nice bathroom and shower, for only 30 euro. After a long bath with me at a nearby restaurant.

I begin my dinner with 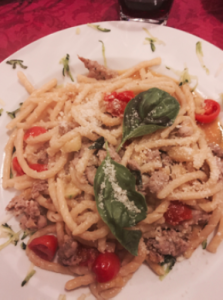 Militellesi appetizers, then a wonderful dish of pasta with zucchini, sausage, cherry tomatoes and basil. All washed down with local wine.
Once satisfied the body i allow myself to make bit of attention to the intellectual needs and despite the fatigue of the day, i walk a bit in the beautiful historic Baroque.
I discover here that Militello is one of 8 UNESCO world heritage city rebuilt after the devastating earthquake of 1693!
Among the other cities I visit in the coming days and that will require a return trip, are: Noto, Modica, Ragusa, Scicli, Palazzolo Acreide, Catania, Caltagirone.

I finished my visit with a small digestive, but now I have overcome the fatigue and sleep is ready to wrap

Continued the next week……….

From Capo d'Orlando to Capo Passero by bike (p2)